Rousay GHEA Project
The Rousay, Orkney: Gateway to the Atlantic project is now a GHEA project. Further details about this and the collaboration between GHEA members can be found here.

Rousay NABO Project
The Rousay, Orkney: Gateway to the Atlantic project has now been added to the NABO Project Management System. More details on this project and the latest developments are available here.

Rousay's heritage snatched from the sea
Report on the Orkneyjar website about the 2011 excavations at Swandro in Rousay.

The Vatnsfjörður Excavation Project
Details about the Vatnsfjordur Project and the field staff involved. 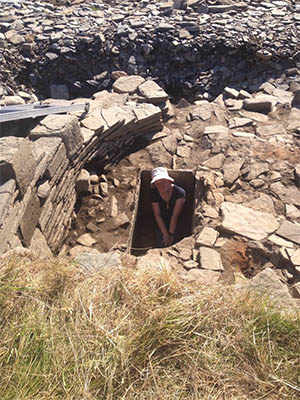 This year's excavations at Swandro, on the Westness coastline of Rousay, proved to be extremelysuccessful. The endangered multi-period site, much of which is under the storm beach, is being pounded by the winter storms and every tide is like a vacuum sucking out the finer midden and ash based deposits. This year's excavation has provided a valuable insight into both the Iron Age settlement mound and the Neolithic Passage Grave and has reinforced the importance of this fragile site.

Two Iron Age buildings formed the focus of study this year, Structure 2, a building dating to the first half of the first millennium AD has a number of floors. The removal of a flagged floor this year by Bobby Friel (of Rousay) provided a glimpse of earlier levels and some in situ metalworking evidence. Signs of an earlier stone built tank pre-dating the floor proved of interest, Steve Dockrill (co-director of the project with Julie Bond) commented “this was an unusually large tank, big enough to hold Wendy, one of our American excavators, and it is hoped that samples from the infill might give us some insight into its last use.”

More details can be found in this report and at www.swandro.co.uk.

Watch a short video of Swandro.

The Swandro – Orkney Coastal Archaeology Trust is racing against time and tide to raise the money necessary to excavate and record the site at the Knowe of Swandro, in the Orkney island of Rousay. Every winter the Atlantic gales take more of the site – a largely undisturbed Neolithic chambered tomb, with Iron Age roundhouses and Pictish buildings. We owe it to our ancestors and future generations to record these burials and houses before they are lost forever to the encroaching ocean. 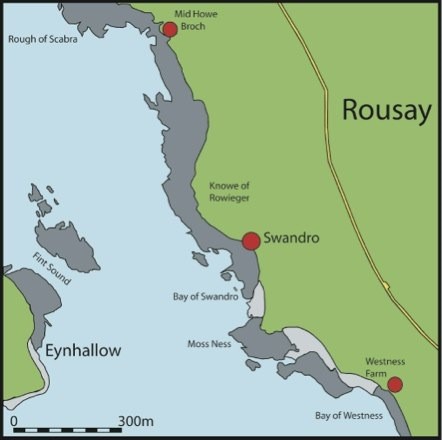 The Knowe of Swandro on the Orcadian Island of Rousay, (HY 3753 2966 ), consists of a mound with obvious stone inclusions, which is situated immediately behind a boulder beach on the Bay of Swandro. On its eastern flank is the Norse settlement site known as Westness, excavated by the Norwegian archaeologist Sigrid Kaland in the 1970’s (Kaland 1993). Described by RCAHMS in 1946 as ‘the much disturbed remains of a stony mound’, this knowe has generally been considered to be the remains of an Iron Age broch. At the top of the mound a crescent-shaped wall or ridge faces towards the sea, which looked like the disturbed remains of a curving wall, surrounding an area which had large tumbled stones visible in the grass. Ordnance Survey records suggested it had been investigated at some point in the past but there is no published record. The mound may have been disturbed during Radford’s investigation of the nearby Westness Norse houses in the 1950’s or 60’s.

As part of the Gateway to the Atlantic Project a number of coastal erosion sites were selected for investigation on the Island of Rousay. Due to the vulnerability of the remains at Swandro, work has concentrated on the investigation of this site. This research builds on the site and landscape studies undertaken at Tofts Ness, Sanday (1984-8 by Dockrill), Old Scatness and Jarlshof (1995-2006) in Shetland by Dockrill & Bond and the Viking Unst (2006-8) project by Bond.

The key research questions for the project are:

This would facilitate the following:

Here are a range of photographs taken of the site, including aerial images. 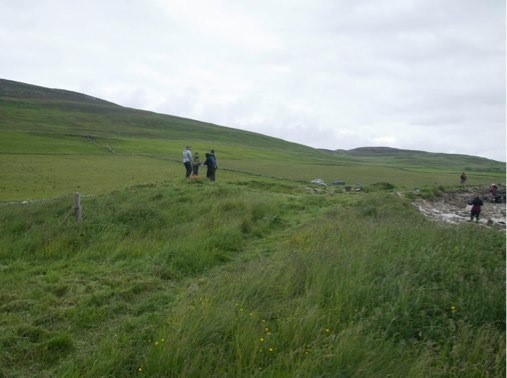 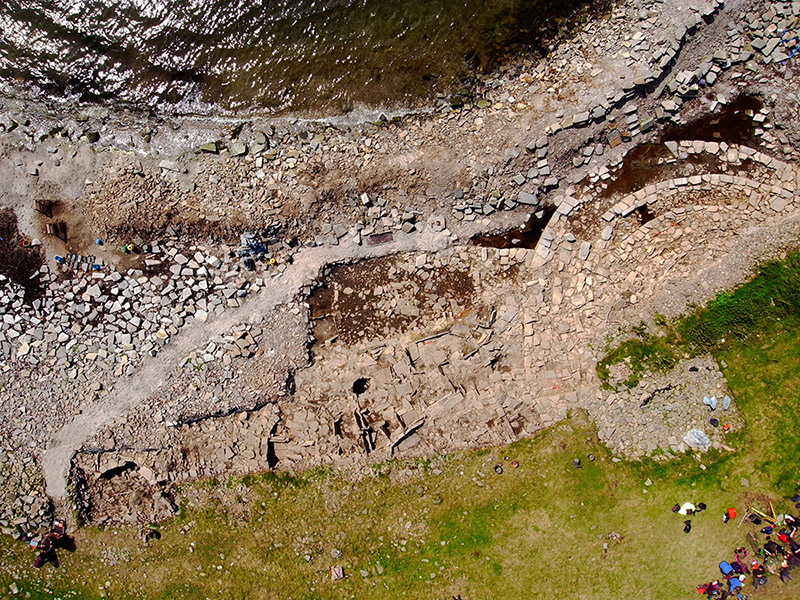 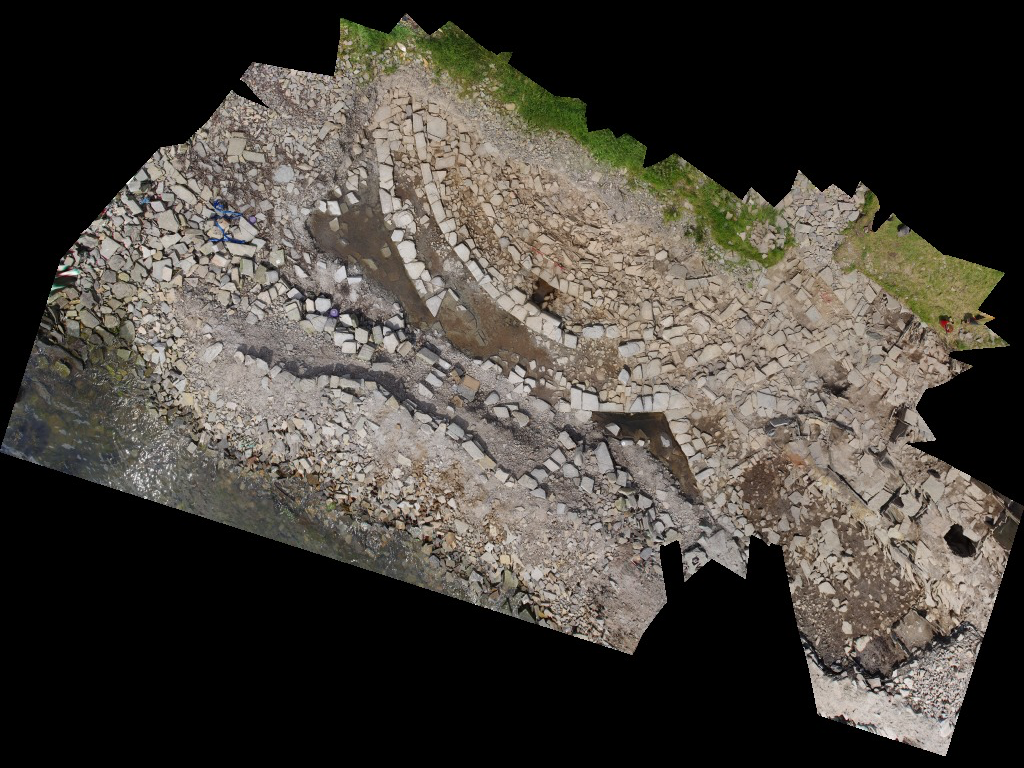 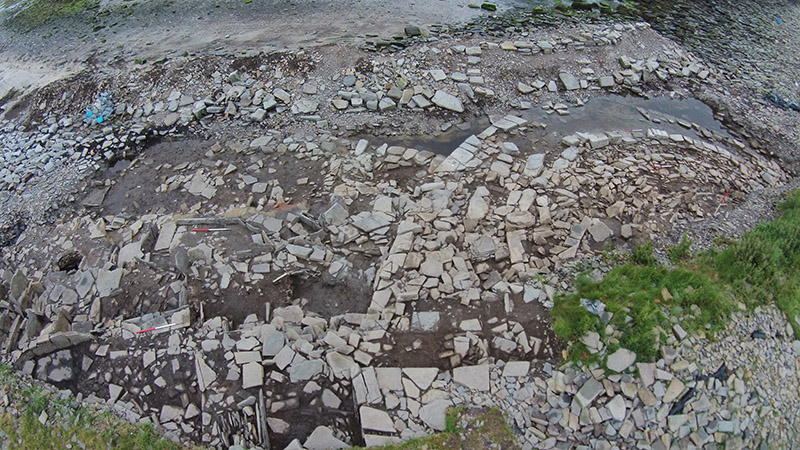 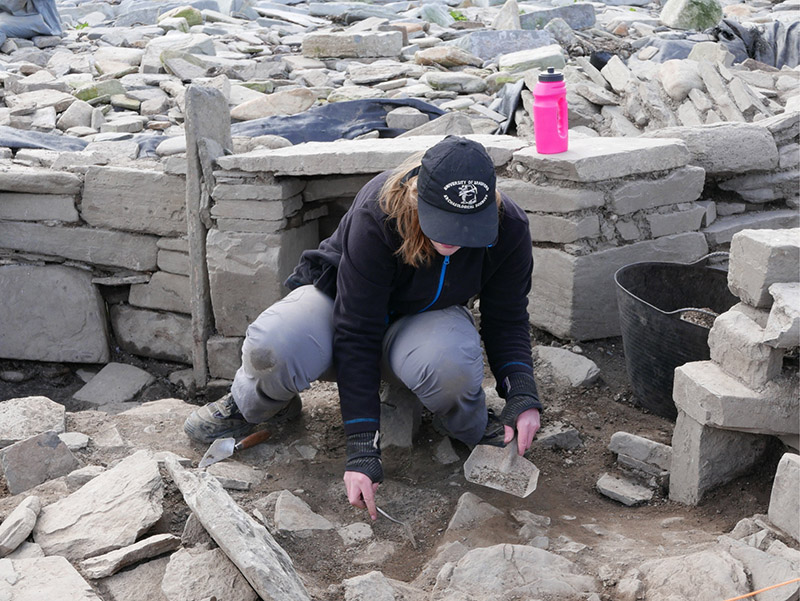 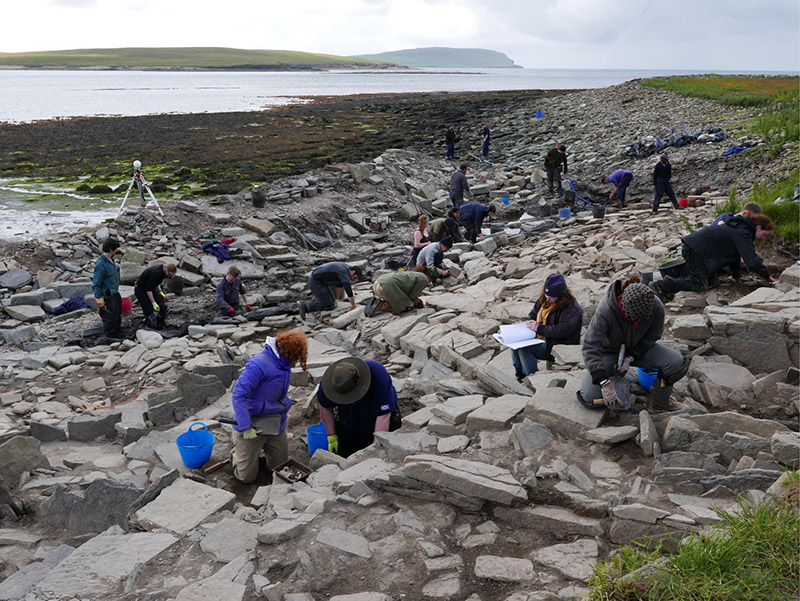