The Vatnsfjörður Excavation Project
Details about the Vatnsfjordur Project and the field staff involved.

Orkney Gateway to the Atlantic

The second season of a field school run by archaeologists from the University of Bradford and Orkney College (part of the University of the Highlands and Islands) took place in Rousay, Orkney this summer. The Orkney Gateway to the Atlantic project is part of North Atlantic Biocultural Organisation (NABO). research into how people reacted and adapted to climate and environmental change across the North Atlantic.

Due to the northerly position of Orkney, the islands have shorter growing seasons and a degree of marginality, which offers a remarkable opportunity to study the long-term effects of climate change and how people survived and adapted, from the first farmers over 5,000 years ago down to the clearances in the 19th century. As well as adaptation and sustainability, this long time dimension allows us to study cultural changes due to contact and trade.

The field school was led by Steve Dockrill and Julie Bond from the Division of AGES, University of Bradford, and by Julie Gibson, Jane Downes and Ingrid Mainland with the assistance of James Moore: all from Orkney College, UHI. Ruth Maher from the USA, a former doctoral student of Hunter College, CUNY, also formed part of the team along with Zoe Outram, Bobby Friel and Nigel Melton from AGES. Students from Bradford University, Orkney College and City University, New York took part in this year’s project.

The majority of sites being studied by the project are coastal, as Orkney has a serious and growing problem of rising sea level and coastal erosion. Two sites suffering from coastal erosion were examined this year; the broch mound at South Howe and the Knowe of Swandro. Both sites have enormous research potential, and will provide important archaeological and scientific data which will be used to study how people in the past confronted the marginality of these northern islands.

Cliff Excavation Reveals the Secrets of the Past 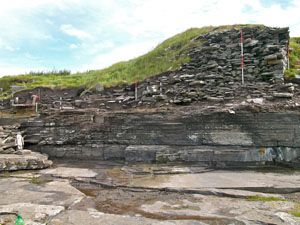 Steve Dockrill examined the mound at ‘Brough’, also known as South Howe. This man-made mound contains an eroding Iron Age broch and houses that seem to be overlaid by late Norse buildings, all of which are overlaid by 19th century middens. This broch is only a few hundred metres away from another broch settlement, Midhowe (excavated in the 1930’s), which again is just a few hundred metres away from another settlement mound, North Howe. Last year, geophysical survey of North Howe confirmed that it was another broch settlement.

One of the questions being investigated by the project is how these three brochs co-existed in such close proximity within Iron Age society and also what happened to these settlements before and after the Vikings arrived.

Prehistoric Building Seized from the Sea 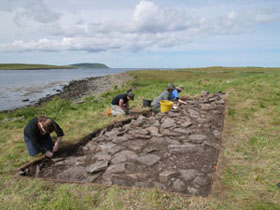 The Knowe of Swandro was investigated by Julie Bond. This site was also thought to be Iron Age and possibly to contain the remains of another broch, probably robbed of stone to build the Norse farmstead of Westness, excavated by Sigrid Kaland in the 1970’s just to the south of the Knowe. Swandro was the subject of an antiquarian investigation which was never published and one of this year’s objectives was to try to relocate those original excavations. A small trench in the top of the mound produced evidence of considerable disturbance of a complex structure overlaid by later paving and shell midden. 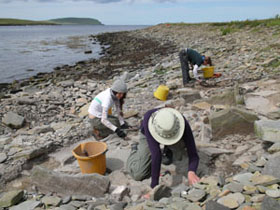 Investigation of odd features on the beach below the eroding site produced a surprising result, which has completely changed our understanding of this enigmatic mound. The tops of stones partly buried by the boulder beach turned out to be orthostats – upright stones forming part of a prehistoric building, under the boulders and within a metre or so of the high tide mark. Although the tops of the stones are worn and battered by the sea, the beach has partly protected the deposits and we were able to recover animal bone and pottery that suggest this structure dates to the Late Bronze Age or Early Iron Age. At that time the sea level would have been several metres lower and the sea much further away from the settlement. These discoveries show that Swandro is a much bigger and longer-lived settlement than it was thought to be and is a perfect example of both the potential of these sites and the necessity of investigation before the sea takes them forever.