Farm It Right
A game-based model exploring the sustainability of early Norse farming in Iceland and Greenland, partly based on Búmodel. Click here.

Two major modelling efforts currently exist within the NABO community, operating on environments in the North Atlantic. The Stirling-based group has developed Búmodel (originally by Amanda Thompson: Thomson, 2003 and subsequent papers), which is an environmental simulation model of historical land management and grazing pressure. The Stirling group are working on modelling and GIS-related applications at the scale of the individual landholding up to the scale of a community. Models are tested against soil and sedimentary data from the Faroe Islands, Iceland and Greenland.

The Edinburgh based group has developed a landscape-scale model of climate and environment (PLACE: Casely, 2006 and subsequent papers), as well as new developments of population models for Iceland by Richard Streeter, and snowcover modelling being developed by Laura Comeau. Both groups and modelling strategies are involved in the Leverhulme Trust funded project "Footprints on the Edge of Thule". 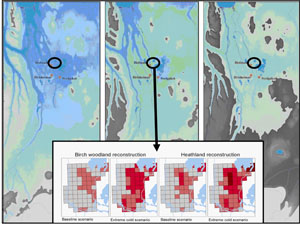